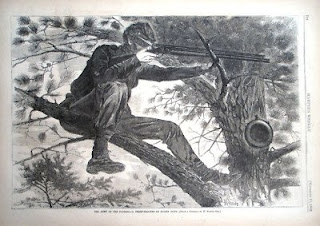 FOUR CIVIL WAR PAINTINGS BY WINSLOW HOMER
"...if the painter shows that he observes more than he reflects, we will forget the limitation and take his work as we take nature, which if it does not think, is yet the cause of thought in us." ---The Evening Post, New York, May 31, 1865
1. SHARPSHOOTER
(A Union sniper in a tree)
Some part of art is the art
of waiting---the chord
behind the tight fence
of a musical staff,
the sonnet shut in a book.
This is a painting of
waiting: the sharp crack
of the rifle still coiled
under the tiny
percussion cap, the cap
poised under the cocked
curl of the hammer,
and this young man among
the pine needles,
his finger as light as a breath
on the trigger,
just a pinpoint of light
in his one open eye,
like a star you might see
in broad daylight,
if you thought to look up.
----Ted Kooser
Ted Kooser's Four Civil War Paintings by Winslow Homer (1. Sharpshooter)
I'm cheating a little bit by only including this one section of Ted Kooser's examination of four Winslow Homer Civil War paintings, but I'm including this specific section for a reason. Like Ted Kooser, Winslow Homer's Sharpshooter painting spoke to me. Years ago I encountered the picture at the top of this blog post. It was frighteningly real, made all the more unsettling because Homer was observing this soldier waiting for his next kill to wander into sight. Homer's eye for detail made the painting vivid, but also cemented in my mind that he watched this soldier steady himself in his perch and patiently do his job. My mind raced when I stared at this painting, and even now I'm still swimming in backstories for this soldier, the soldier he will shoot at, and their combined families. Homer captures the situation in the midst of the action, filled with tension that only grows as the sharpshooter is always on the ready. I tried my hand at writing a persona poem of Winslow Homer's sharpshooter and I still think the poem is pretty good, but Ted Kooser beat me to it by a bunch of years. If I'm being honest with myself, Ted's poem is probably a little bit more stirring than my own. Why is that so? Well let's see...
With his hard enjambment of the first line producing a symbolic pause and wait for the next line, Ted Kooser launches us into the world of Winslow Homer's Sharpshooter. Homer took his subject and perfectly depicted him at his patient and focused best; Kooser provides examples where similar waiting must take place in the world of art: the musical chord hidden behind a pause and the sonnet trapped in a book waiting to be opened and explored. Just as the action is supposed by Kooser, Homer has taught him how to do this with his Sharpshooter painting. Kooser notes this in a list that builds sequentially backward from the "sharp crack of the rifle" to the "young man among / the pine needles." At this moment, after all the planning and setup, Kooser delivers the goods. He describes the soldier's finger "as light as a breath / on the trigger." This simile folds into another that is so intricately constructed that it comes off as natural as the breath Kooser just described. "A pinpoint of light / in his one open eye" is filtered from Homer's canvas through Kooser's mind to become "a star you might see / in broad daylight, / if you thought to look up." This is such a clever, fitting, and abrupt ending. Notice how Kooser has kept us aware of the event in the painting and the art of capturing this action, but now he finally shifts the readers into the minds of the prey. We are left as the soldiers walking along the path home or the path to the next battle, only to meet our swift demise. Kooser knows there is beauty in the Sharpshooter's eye, that is why he compares it to a star. Still, the Sharpshooter and his eye are also elusive, a quality that is essential to his survival and success. Purposefully, Kooser has kept our vision focused on the Sharpshooter up to this point, but in the end he shakes us with the final line of "if you thought to look up." This disorienting closure throws us back into the role of the soldiers walking the trail. We have just studied the hunter and now, without warning and not by choice we become the hunted. It is primitive and painful, it is masterful and measured, it is emblematic of many struggles that develop in war, but most of all it is great art rising from the carcass of our country's greatest prolonged tragedy and spurring on a chain of great art in years to follow.
Posted by Matthew A Kaberline at 6:57 PM